“Yella, yella”.  That’s a phrase I heard a lot when I was growing up.  A Middle Eastern family had moved to our neighborhood in the late 1960s. There were three girls and one boy, and they became a big part of our neighborhood, a tiny cul-du-sac with a gang of kids numbering nearly 15.  Whenever their mom needed them for one thing or another, it was always “yella, yella”, (translated: come quickly), that we’d hear floating in the air.

The family seemed mysterious, speaking a language with sounds unfamiliar to my eager ears.  The patriarch, a philosophy professor from Lebanon, and the gorgeous and influential matriarch (a former Miss Jordan) were so excitingly different from my own parents, their life, so excitingly different than my own.  I can still vividly recall the scents of cinnamon, garlic, mint and unfamiliar spices that would emanate out the front door of that house each day.

While I was eating bologna sandwiches and pizza fish (believe me, you don’t want to know), they were feasting on delights such as dolmas, hummus and babaganoush.  There had been no foodie revolution yet and suffice it to say, I wasn’t very adventurous.   I essentially refused to try most of the food my neighbors encouraged me to eat because I thought it was all “weird”.   I wouldn’t even try baklava or Turkish coffee….what the h*## was wrong with me?

I did, however, eat their puffy, warm, homemade pita bread, with its irresistibly tempting odor.  And I was smitten with the “safest” looking dishes, tabouleh and tiny pizzas topped with ground lamb, pinenuts, and herbs. Now that I’ve grown up, perhaps even matured, I eat yogurt and hummus nearly every week, finally adore decadent baklava and can’t get enough thick, dark coffee.  Another Middle Eastern treat I’ve tried recently and have enjoyed was Jordanian wine.

When my old friend heard I had become active in the world of wine she hand-carried a couple of bottles from Jordan to California on one of her visits.  They were provided by Zumot Winery and Vineyards (www.zumot-wines.com) and Haddad, Wine of the Holy Land (www.eagledis.com).  The first of the wines was a 2010 St. George Petit Verdot, Winemaker’s Selection, from winemaker Omar Zumot.  Zumot’s wines are made with grapes sourced from three areas within Jordan:  Madaba, which is south of Amman, Souf, located in a nearby mountainous region, and Sama-A-Sarhan, near the Syrian border.  This Petit Verdot was produced using grapes from Sama and aged in French oak.  Zumot’s family has been making wine in this area of the Middle East since 1954 and their goal is to let nature takes its course with wine, and allow the terroir of the region to shine through in their organic wines. Their local soils are known for their ideal blend of basalt, limestone and clay. 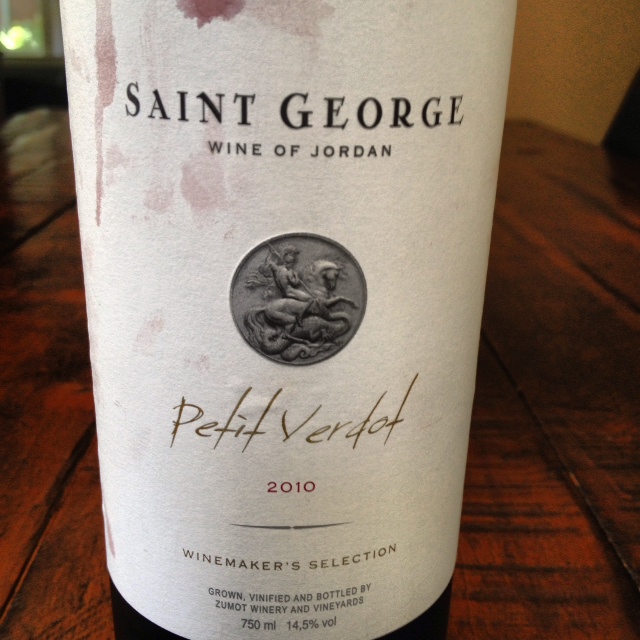 This particular wine was a deep garnet color, and it was subtly aromatic.  It had hints of raspberry, vanilla and just a touch of smoke in the background.  Its tannins were gentle, and the wine was laden with a dry finish and subtle fruit flavors.  It had a sensual feel in the mouth, and had what I would consider a short-medium finish.  I thought this wine was lovely and balanced; it demonstrated a more old-world style of winemaking than new.

The second wine I sampled was a 2011 Sauvignon Blanc and Verdicchio blend.  It was produced by Haddad and carried their Mount Nebo label.  Price point information was not available to me on either wine.  This straw-colored wine, a relatively uncommon coupling, had pronounced zesty lemon notes and earthy aromatic character.  It was tart, bone dry and had a bit of nuttiness in its flavor profile.  It did have a bit of zing in the nose, usually consistent with a touch too much SO2 used during production1. 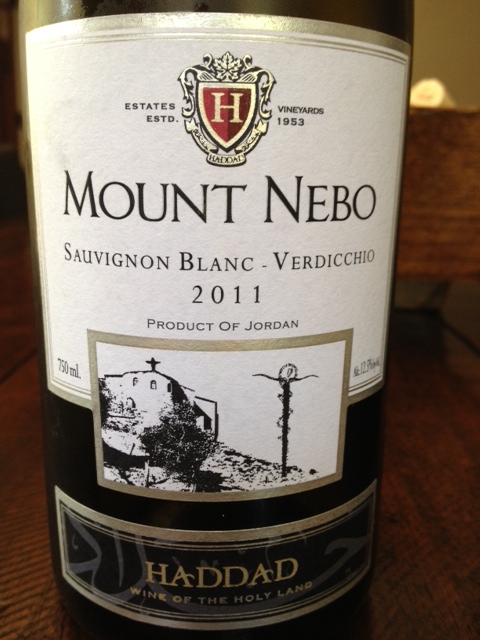 This white was a great food wine.  It was crisp and acidic, but not too acidic, and it wasn’t trying to be too fruity, too oaky, or too sweet.  It was a wine that just wanted to be wine, and I admired that.

In 1953, the Haddad family established a spirits export business, Eagle Distilleries.  They ultimately began producing their own wines from grapes grown in the northern regions of Jordan and pride themselves on creating wines that showcase the country’s terroir.  Haddad recommends pairing this wine with spicy food, fish, white meat, salads, bar-b-que, and light pasta dishes.

I shared both wines with local Sacramento wine connoisseur, Darrell Corti, and he called them “admirable efforts”, that were “nicely savory with aging potential”.

Despite its arguable relative obscurity in today’s western wine market, the Middle East is perhaps the cradle of wine civilization.  It was in this region that early fermented grape beverages made their way on the scene, likely sometime before the 8th century.  Archaeologists have found pottery shards with wine-like residue and grape pips from as far back as the Stone Age in areas such as Jordan, Syria and Lebanon.

As Islam spread throughout the area, and wine became a prohibited beverage for most, production decreased.  At the time, some Christians and Jews still made small amounts of wine for religious purposes, and by the late 19th Century, Jesuit monks, well-known for their knack with wine in Europe, moved in and established new vineyards in the area that is present-day Lebanon.  Today much land is planted to wine grape in Lebanon’s Bekka Valley as well as areas within Israel. (Johnson, Hugh, The Story of Wine, 2005).

If you happen upon a bottle of Middle Eastern wine, I hope you’ll be more open to experimentation than I was to the food and drink from that region so many years ago.  If the two wines I tasted are representative of what is being produced in the Middle East today, I say it’s worth your while to get out there and taste something new.  Bil-hanā’wa ash-shifā’ (may you have your meal with gladness and health).

1Sulfur dioxide is a necessary evil in winemaking; it prevents microbial spoilage and keeps wine from oxidizing, thus preventing browning.  The issue is that when present above certain thresholds, it can leave a gaseous trail.  Fortunately, many people can’t perceive the gas.  If you can, sometimes, the gas will dissipate a bit in the glass, or be less noticeable if the wine is very cold.

Writer of All Things Wine