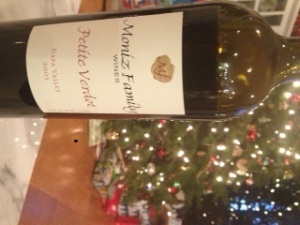 Tonight required a satisfying glass of red wine.  You might be thinking the cause is the holidays; too much hustle, too much bustle.  That is not the impetus for this sipping session.  Tonight let's blame…the rats.  (NOTE TO KATIE:  Don't be grossed out-rats are not discussed for long!).  There has been a rather robust rodent running amok in the ceiling and walls…the professionals say he must die in his own time–egads!  The incessant scratching, scurring and climbing has driven this blogger to drink.  It is downright disturbing.  Tonight's Antidote:  deep, dark Moniz Family 2005 Petite Verdot.

Petit Verdot (true spelling) peaks out from behind the shadows of its Bordeaux cousins and stars of the region:  Cabernet Sauvignon and Merlot.  Rarely found vinted on its own, this grape variety is one of the 5 common grapes used throughout the Bordeaux region for blending.  Along with Cabernet Franc & Malbec, Petit Verdot augments and adds subtlety to some of the most beautiful red wines in the world.  A late ripener, it has small, dark, berries and thick skins.  That kind of combination provides a skin to pulp ratio that produces inky and intense wines.  Many wines in the Medoc appellation of Bordeaux will contain decent amounts of this grape.

What I like about this wine when produced as an independent varietal is its heft.  It is moderately to highly tannic, luxuriously so.  It has an opacity reminiscent of midnight and I find that to be attractive in any wine I drink to escape.  I like studying the flavors and recognizing the components that are found in the many Cabernet Sauvignon blends I drink.  Remember, in the US, labelling laws are such that a wine only needs to contain 75% of the varietal that is called out on the label, so suffice it to say, other grape varieties like Petit Verdot are sitting in your glass of Napa Cab.  I think this varietal lends perfume, spice, beautiful color and gracious tannins to many Cabernets we all drink.

I find Petit Verdot to be laden with flavors of black fruit, black spices and with this example, plenty of vanilla and toast from its aging.  I love that the color of this 2005 is not quite as purple as it likely used to be….as it ages, it is moving toward garnet.  Sometimes when I drink this wine, it reminds me, ever-so-slightly of syrah.  In addition to this single varietal, you can encounter this grape in most Meritage wines.  An American labelling term, Meritage (rhymes with heritage) is a term winemakers can use on their bottles if they belong to the official Meritage Association and adhere to usage of all the traditional Bordeaux grapes mentioned above (and some whites as well).There is one other single varietal bottle I have enjoyed;  it is produced by Marques de Grinon out of Spain.  There is also a Petit Verdot/Petite Syrah blend that is reasonably tasty and inexpensive out of Lodi, CA by LangeTwins.

So, after finishing my glass of red and waxing a bit Bordeaux on you all, I barely notice the cacophony of disgusting little plague-laden vermin in my home.  As good a reason as any to enjoy Petit Verdot.

Writer of All Things Wine